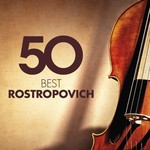 A 3-CD compilation of the great cellist Mstislav Rostropovich.

Mstislav Leopoldovich Rostropovich affectionately known as Slava, is a Russian and American cellist and conductor, considered by some to be one of the greatest cellists ever. He is well known for his interpretations of Dvořák: B minor cello concerto, Haydn's cello concertos in C and D, and for his commissions of new works which have considerably enlarged the cello repertoire (notably by Shostakovich, Prokofiev, Britten, Lutoslawski, Penderecki and Dutilleux).

Rostropovich was born in Baku, Azerbaijan, then part of the Soviet Union. From 1943 to 1948, he studied at the Moscow Conservatory, where he became professor of cello in 1956.

Early years
Rostropovich was born in Baku, Azerbaijan, to a Russian family. At age 4, he learned the piano with his mother who was a talented pianist, and started the cello at the age of 10 with his father, who was also a cellist and a student of Pablo Casals.

He entered the Moscow Conservatory in 1943, at the age of 16, where he studied not only the piano and the cello, but also conducting and composition. Among his teachers were Dmitri Shostakovich and Sergei Prokofiev.

First concerts
Rostropovich gave his first cello concert in 1942. He won first prize at the international Music Awards of Prague and Budapest in 1947, 1949 and 1950. In 1950, at the age of 23 he was awarded what was then considered the highest distinction in the Soviet Union, the Stalin Prize. At that time, Rostropovich was already well known in his country and while actively pursuing his solo career, he taught at the Leningrad Conservatory (now Saint-Petersburg) and the Moscow Conservatory. In 1955, he married Galina Vishnevskaya, soprano at the Bolshoi Theatre.

His international career started in 1964 in what was then West Germany. As of this date, he went on several tours in western Europe and met several composers, including Benjamin Britten. In 1967, he conducted Tchaikovsky's opera Eugene Onegin at the Bolshoi, thus letting forth his passion for both the role of conductor and the opera.

Exile
Rostropovich fought for art without borders, freedom of speech and democratic values, resulting in a reprimand from the Soviet regime. His friendship with Aleksandr Solzhenitsyn and his support for dissidents led to official disgrace in the early 1970s. He was banned from several musical ensembles and his Soviet citizenship was revoked in 1978 because of his public opposition to the USSR's restriction of cultural freedom. Rostropovich left the USSR in 1974 with his wife and children and settled in the United States.

Further career
Mstislav Rostropovich with Julian Lloyd WebberRostropovich has been a huge influence on the younger generation of cellists. Many have openly acknowledged their debt to his example. Julian Lloyd Webber remarked "no other single person has done as much for the cello as he has", The Independent, London.

From 1977 until 1994, he was musical director and conductor of the National Symphony Orchestra, Washington, DC, while still performing with some of the most famous musicians such as Sviatoslav Richter and Vladimir Horowitz. He is also the director and founder of many music festivals (Aldeburgh, Rostropovitch Festival).

His impromptu performance during the Fall of the Berlin Wall as events unfolded earned him international fame and was shown on television throughout the world. His Russian citizenship was restored in 1990, although he and his family had already become American citizens.

Rostropovich received many international awards, including the French Legion of Honor, and honorary doctorates from the most prestigious international universities. He is an activist, fighting for freedom of expression in art and politics. An ambassador for the UNESCO, he supports many educational and cultural projects. Rostropovich has performed several times in Madrid, and is a close friend to Queen Sofia of Spain.

Rostropovich's instrument is the 1711 Duport Stradivarius, considered to be one of the greatest instruments ever made.

On February 6, 2007 the 79 year old Rostropovich was admitted to a hospital in Moscow. "He is just feeling unwell," Natalya Dolezhale, Rostropovich's secretary in Moscow, said. Asked if there was serious cause for concern about his health she said: "No, right now there is no cause whatsoever."

She refused to specify the nature of his illness. The Kremlin said late on Monday that President Vladimir Putin had visited the musician in hospital, prompting speculation that he was in a serious condition.

But Dolezhale said the visit was to discuss arrangements for marking Rostropovich's 80th birthday.