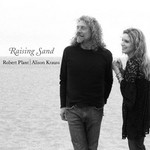 Two of the most distinctive vocalists in modern music, present their astonishing new collaborative album. The pair create an amazing, unexpected, and entirely new sound when they sing together.

Plant is quick to define 'Raising Sand' as more a band record than a duet record, as it puts the two great singers in a variety of vocal and instrumental combinations - from songs featuring two-part brother-style harmony throughout to solo features for each. Though they come from entirely different traditions, Alison Krauss and Robert Plant create an amazing, unexpected, and entirely new sound when they sing together. The material, ingeniously chosen by Burnett with input from Plant and Krauss, is the crucial thread that guides 'Raising Sand' and gives the two unique singers a forum to interact and equally express themselves.

"You've got two singers that can handle a wide range of material - storytellers," explains Burnett. "So you look for the stories..." Krauss explained that the genesis of 'Raising Sand' came about seven years ago, when Plant called to say hello and that he'd love to work with her someday. A few years later, Plant made good on his word and called Krauss about participating in a Leadbelly tribute at the Rock and Roll Hall of Fame, where they sang together for the first time. The partnership revealed instant potential to the pair, and several years later they enlisted Burnett to help them realize a more full-scale collaboration.

The combination of Krauss' silken interpretation of American roots forms with Plant's defiantly, globally-informed mélange could have turned down any number of sonic byways. Yet Burnett's relentless focus and the selfless dedication of the two principals has resulted in an album that defies genres in favor of a wide open brand of seismic soul music. Pitched three steps beyond some cosmic collision of early urban blues, spacious West Texas country, and the unrealized potential of the folk/rock revolution, 'Raising Sand' is shockingly evocative - an album that uncovers popular music‚s elemental roots while sounding effortlessly, breath-takingly modern.