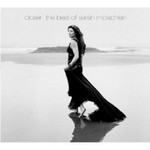 We don’t have this item in our warehouse or stores at the moment, but the supplier has stock. We should be able to get it to you in 2 - 4 weeks from when you order it.

'Closer: The Best of Sarah McLachlan' is a gorgeous selection of songs which surveys the spectacular career of the multi-platinum singer / songwriter. The CD contains 16 classic tracks (incl. "In the Arms of an Angel"), personally selected by the artist from her award-winning catalogue. Also included are two newly recorded and previously unreleased songs, "U Want Me 2" and "Don't Give Up On Us", working with her longtime producer Pierre Marchand.

Since joining Arista two decades ago, every one of Sarah McLachlan's studio and live albums and videos have been certified gold, platinum, or multi-platinum by the RIAA, starting with 'Touch' (1988) and 'Solace' (1991), both gold sellers. Her 1993 breakthrough, 'Fumbling Towards Ecstasy' (triple-platinum) was followed by the digitally enhanced multimedia version of 'The Freedom Sessions' (1995, gold). Sarah's landmark fifth album, the 8x-platinum 'Surfacing' (1997), contained two Grammy Award-winning tracks, as "Building a Mystery" won for Best Female Pop Vocal, and "Last Dance" was voted Best Pop Instrumental. 1999's triple-platinum 'Mirrorball', and its platinum long-form video counterpart, were both culled from that year's Lilith Fair tour, and spun off Sarah's third Grammy-winning performance, as "I Will Remember You" won for Best Female Pop Vocal. The double-platinum 'Afterglow' followed in 2003, and received a Grammy nomination for Best Pop Vocal Album, while its opening track, "Fallen" was nominated for Best Female Pop Vocal. 2007's 'Wintersong', was the #1 best seller on the Holiday Album charts that year, was nominated for a Grammy for Best Traditional Pop Vocal Album, and was certified Platinum, marking her 15th release to be certified gold, platinum, or multi-platinum by the RIAA.

Love is the Answer