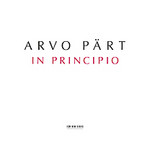 "This is a superbly constructed recital of some of the most recent music of Estonian composer Arvo Part." (Five Stars AudAud.com)

"This is a superbly constructed recital of some of the most recent music of Estonian composer Arvo Part. Part continues to lead the league in music that is both profound and honestly religious in sentiment; there is never a moment in Part where one detects indiscreet affectation or phony pietism; his music is redolent with sincerity and communicative ability. In principio takes its texts from the Gospel of John (mixed choir and orchestra) and is a firmly and profoundly moving piece. La Sindone (orchestra alone) takes its program from the Shroud of Turin in Italy (Santa Sindone), music that portrays the relic and all of its mysteries while still probing the uncertain status of its origins."
(Five Stars AudAud.com)

"Recent compositions, while not relinquishing the ethereal beauty we associate with Pärt, have seemed less confident in their serenity… A sense of anxiety pervades the oldest piece… Mein Weg… and sometimes, as with In Principio and La Sindone, there are episodes of almost bruising physicality which is a little shocking in the context of Pärt's mature music." BBC Music Magazine, April 2009 *****

"Superbly performed and recorded, this CD is self-recommending to anyone interested in Pärt's recent work and his tentative ways forward from doctrinaire schematicisim." Gramophone Magazine, May 2009

"His music makes the basic human need for a link between aesthetics, ethics and spirituality clear and perceivable - a need so often subordinated to politics and economics in our society." Thus the words with which Arvo Pärt was awarded the International Bridge Prize of the twin cities Görlitz and Zgorzelec in 2007. His new CD, 'In Principio', demonstrates the extent to which his more recent music manifests this very link. Twenty-five years ago ECM launched its New Series with Pärt's Tabula Rasa. Now its twelfth Pärt album, again produced by Manfred Eicher, presents six compositions of various lengths spanning a period of almost ten years. Four of the pieces appear here for the first time on disc. The meticulous performances were recorded by Estonian ensembles under the baton of Tōnu Kaljuste, a conductor well-versed in Pärt's music for many years, and accompanied by the composer every step of the way.

The range is wide: Pärt creates masterly syntheses of the expressive resources he has pursued ever since his personal style emerged in the mid-1970s. The intimate and the monumental co-exist; streams of chords flow towards dramatic eruptions. The inflection of his pieces is always based on their underlying emotive significance. In Principio is a five-movement setting of the opening verses of the Gospel of John: "In the beginning was the Word". The elegiac orchestral piece "La Sindone" conjures up the image of Christ on the Shroud of Turin. "Cecilia, vergine romana", written to celebrate the sacred year 2000 in Rome, is devoted to the martyrdom of the patron saint of music. A serene plea for peace, memories of a deceased friend and contemplation of the 'peaks and troughs' of life: these are the emotional way-stations of the three relatively short pieces here, encapsulating the magic of Pärt's music.