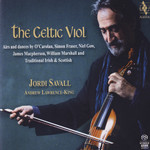 "The playing on this disc is simply beyond criticism, and it should hold great attraction for folk song enthusiasts, classical aficionados, and Celtic music buffs alike. This is crossover in the very best sense of the word."
(Five Stars AudAud.com)

"Jordi Savall has finally turned his mind to Scottish and Celtic music which he first encountered in 1975, and has become increasingly enamored of ever since. Please bear in mind that this is not music as you might hear on a Chieftains album, though some of the tunes are the same. Most of these pieces only attainted written status at the end of the 1600s or later, and Savall approaches them all in the spirit of oral tradition, where the melodies were passed from generation to generation. Indeed, he freely admits in the excellent notes (and superb production, as usual) that for many of these works there is no known way of accompaniment or even of how to render the melodic lines. But using his musical instincts he has produced renditions in as caring and thoughtful a manner as possible, also taking into consideration the living performance practice of these works by other artists dating back to the earliest years of recording.

This SACD is divided pretty much equally between solo treble viol melodies and those with improvised and steadily supportive harp work by Andrew Lawrence-King, surely the most creative such musician in this sort of work alive today. You will not find a lot of rambunctious performances a la Fiona Ritchie's public radio program The Thistle and Shamrock. These are unadulterated, bare-bones readings of an important and underrated aspect of Celtic national heritage, true period practice if ever the word had any meaning at all. Much of the music comes across as meditative, subtly foot-tapping, and yet gloriously beauteous melodies that one can only imagine gracing the hearths of many an Irish or Scottish household over the last 500 years, with their remnants transported to many similar homes in olden North America as well.

The playing on this disc is simply beyond criticism, and it should hold great attraction for folk song enthusiasts, classical aficionados, and Celtic music buffs alike. This is crossover in the very best sense of the word."
(Five Stars AudAud.com)