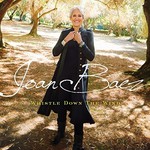 Joan Baez
Whistle Down The Wind

Whistle Down The Wind is Joan's first new studio album in a decade, since 2008's critically acclaimed, Grammy -nominated Day After Tomorrow, which was produced by Steve Earle. Its release ignited an extraordinary decade of achievement by Joan, including: the PBS American Masters series premiere of her life story, Joan Baez: How Sweet The Sound (2009), which underscored the 50th anniversary of Joan's debut at the 1959 Newport Folk Festival. Joan's seminal debut album of 1960 was honoured by the National Academy of Re-cording Arts & Sciences in 2011, which inducted it into the Grammy Hall Of Fame; and subsequently by the Library of Congress in 2015, which selected it to be preserved in the National Recording Registry. That same year, Amnesty International bestowed its highest honour on Joan, the Ambassador of Con-science Award, in recognition of her exceptional leadership in the fight for human rights and she was inducted into the Rock And Roll Hall Of Fame in April 2017.

Joan Baez remains a musical force of nature of incalculable influence. She marched on the front line of the civil rights movement with Martin Luther King, shined a spotlight on the Free Speech Movement, took to the fields with Cesar Chavez, organized resistance to the Vietnam War, inspired Vaclav Havel in his fight for a Czech Republic, saluted the Dixie Chicks for their courage to protest the Iraq war, and stood with old friend Nelson Mandela in London's Hyde Park as the world celebrated his 90th birthday. Joan's earliest recordings fed a host of traditional ballads into the rock vernacular, before she unselfconsciously introduced Bob Dylan to the world in 1963. Thus began a tradition of mutual mentoring that continues on Whistle Down The Wind, and which will reverberate long into the future across Joan's lifetime of recordings.