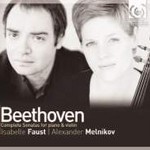 Gramophone Awards 2010: WINNER: Chamber - "The combination of the two fires a laser between the staves...A marvellous set." Gramophone Magazine

"This is as fine a set of Beethoven violin sonatas as has ever been recorded. It has everything: excitement, character, explosive contrasts, subtle shadings, and the long cantabile line that Beethoven demands--and it's superbly recorded as well. Isabelle Faust and Alexander Melnikov form a true partnership, playing off of each other and imbuing the music with a genuine, conversational quality that's very fetching."
(10 / 10 ClassicsToday Oct 2009)

"The musical sleight of hand used by these expert players to focus the very different character of each sonata is in itself cause for wonder. Though quite different as musical personalities...the combination of the two fires a laser between the staves...A marvellous set." Gramophone Magazine, October 2010

Young German violinist Isabelle Faust and Russian pianist Alexander Melnikov follow up their outstanding recording of the "Kreutzer" sonata (as released on Faust's marvellous recording of the Beethoven Violin Concerto) with a set of the 10 Violin Sonatas. A hugely stimulating and life-affirming set of works given performances of such passionate freshness, good humour and liveliness in a typicaly pristine Harmonia Mundi recording: a definite staff pick for 2009 and our favourite reocrding of the whole cycle.

"Beethoven described his 10 sonatas, written over 15 years in the "early" and "middle" periods of his career, as works "for piano and violin". We tend to think of them as the reverse: for solo violin with piano accompaniment. The misconception is ours, not Beethoven's. Except in the earliest examples - the three youthful sonatas in Opus 12 - the two instruments achieve satisfying balance, each a robust character grabbing at every ounce of melodic and harmonic invention Beethoven offers. German violinist Isabelle Faust, playing a Stradivarius, and her ebullient, perceptive pianist, Russian Alexander Melnikov on a Steinway, are ideal partners, wrestling with the musical dialogue with poise, imagination and freshness. The constant interplay of tune and accompaniment, whether as teasing embellishment or bold contrast, gives these works a vitality which Faust and Melnikov unlock in their music-making. A short DVD, part of the recording session included in this four-disc set, indicates the seriousness of their approach. They have gone back to Beethoven's original manuscripts to sharpen their understanding of music they have played since youth. The result is direct, unvarnished performances, informed both by period instrument technique and, in Faust's case especially, by considerable experience of playing contemporary music. This reveals itself in an analytical clarity, especially in the last of the set, the bewitching No 10 in G major, Op 96. Surprising though it now seems, given the preponderance of female string players in modern orchestras, the violin used to be considered a man's instrument. Anne-Sophie Mutter was the first woman to record a complete cycle only a decade ago, joining a catalogue of greats such as Oistrakh, Szeryng, Stern and Perlman and preferring a meaty, more romantic sound. The playing on this new Harmonia Mundi set is so taut and vivid that these older, much admired recordings sound stolid in comparison. Outside the world of violinists, the best known of the 10 are those with nicknames, the radiant "Spring" Sonata in F major Op 24 and the majestic "Kreutzer" Op 47, which inspired a Tolstoy story. Faust and Melnikov make light, supple work of the opening allegro of the "Spring", with discreet use of vibrato and no heaviness in phrasing or ornament. Their "Kreutzer" is vigorous and free from portentousness. Outstanding, and essential listening." GUARDIAN.CO.UK

Johann van Beethoven first became aware of his son Ludwig's aptitude for music when the latter was amusing himself by 'scraping at' a violin. After lessons from his father, the boy was also taught by his cousin Franz Rovantini and became a string player of sufficient skill to play the viola in the Bonn opera orchestra from 1789 onwards. Between the ages of 20 and 24 he set down on paper his earliest compositions for violin and keyboard: a sonata in A major that remained unpublished (Hess 46), 12 variations on an aria from Le nozze di Figaro published in 1793 (WoO 40), a rondo in G major written in 1794 but only released to Simrock for publication much later, in 1808 (WoO 41), and six German dances composed in Prague in 1796 for the Countesses Thun (WoO 42). However, these pieces cannot rival the ten sonatas for violin and piano composed between 1797 and 1812 which Isabelle Faust and Alexander Melnikov have long cherished the prospect of recording. The behind-the-scenes bonus documentary filmed on this occasion, gives an insight into the impressive work on documentation and interpretation that enabled them to get as close as possible to the composer's intentions.

DVD side: making of the recording by Benjamin Krieg and Sonya Schönberger including Allegro moderato, Sonata Op. 96.

Sound the Trumpet - Royal Music Of Purcell And Handel

Rachmaninov: Piano Concerto No. 2 / Rhapsody on a Theme of Paganini