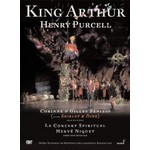 G - "Directed by French comedy duo Corinne and Gilles Benizio… conductor Hervé Niquet's knockabout rewrite of King Arthur is as much a tribute to Monty Python as it is to Henry Purcell. Purists beware." (BBC Music)

"Directed by French comedy duo Corinne and Gilles Benizio… conductor Hervé Niquet's knockabout rewrite of King Arthur is as much a tribute to Monty Python as it is to Henry Purcell. Purists beware. In the bonus feature, Montpellier's artistic director admits that his first reaction was 'Poor Purcell!' But the laughter of the audience is the best review and it is hard to imagine that England's wittiest composer would have disapproved."
(BBC Music)

For its first DVD release Glossa has chosen a veritable spectacular, combining the strong creative ideas represented by one of its established artistic teams in Hervé Niquet and Le Concert Spirituel, the hugely successful French comedy duo of Shirley and Dino (Corinne and Gilles Benizio in real life), a film director in Olivier Simonnet with proven experience in the music of the Baroque and a masterpiece of a dramatic operatic score in Henry Purcell's King Arthur. The production got firmly into gear after Hervé Niquet had parked himself in front of the motorbike of Gilles Benizio, just as the comedian was about to speed off at the end of a 'Shirley et Dino' show, and had requested that the Benizios should become the stage directors for King Arthur in Montpellier. Soon, apparently the music and stage directors found that they held shared tastes in humour, even unto the nonsensical and surrealist elements of Monty Python and its Flying Circus. The new plot with its series of individual scenes even now allows for the role of King Arthur himself (assumed here by João Fernandes) as well as the comic sketches starring Shirley et Dino and other members of the cast - even the musical director gets his turn on the stage, rather than in the pit. The production was staged and recorded last year at the Opéra de Montpellier in France where Le Concert Spirituel has been in residence since 2006.

"Early music conductor Hervé Niquet and his musically ultra chic Concert Spirituel were drawn into the fray, hapless, helpless and superfluous as orchestras so often are in operatic organization, with conductor Niquet taking full advantage of the rare opportunity to take himself center stage, making himself the star of the show as best he could - holding forth with vaudeville songs and schtick. The venerable maestro was upstaged only by Dino's mute rendition of the famed French chanson "Mexico," and Shirley and Dino's skiing across the stage uttering nonsensical German sounding sounds."
Musicweb on the Montpellier production.