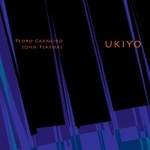 This album is percussion-based, and while it contains moments of explosive energy characteristic of John's work (particularly in the extended chamber ensemble, Psyzygysm performed by Stroma), overall Ukiyo projects an intimacy and moodiness that reveals another side to John's music.

It ends with a touching remix of One Summary by Tim Prebble. Tim has opened up Summary and allowed the ambient atmosphere to breathe. The music itself feels like it is breathing in and out. It's beautiful and mysterious, revealing hidden elements in the piece.

"The most extended work on the disc is Psyzgysm for solo percussionist and a mixed chamber ensemble. The outer sections of the work are often breathtakingly exciting, fusing virtuoso jazz with a Middle-Eastern melodic style. The phenomenal Pedro Carneiro as soloist describes the experience of playing Psyzygysm as 'like rushing downhill on a bike with no brakes'. Expertly engineered, edited and mixed by Steve Garden, this is another winner for the Rattle label. Anyone who's enjoyed previous John Psathas albums is going to love this."
Pressing On, Radio New Zealand Concert, May 29, 2010

View From Olympus-Concertos for saxophone, percussion and piano