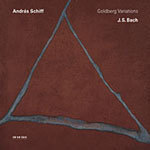 ""Great" is not a word to be used casually when it comes to CDs, but no other term does justice. Lucidity, elegance and strength are all here and exquisitely balanced. The definitive Goldberg? As far as I'm concerned, yes."
Ann Picard, Independent on Sunday

András Schiff returns to the Goldberg Variations in what will be regarded as one of the classical music events of the year. Two decades after his acclaimed account for Decca, Schiff documents Bach's towering masterpiece again, this time in a live recording for ECM New Series.

"Pianists from Arrau to Gould, from Tureck to Hewitt have all made recordings of this great masterpiece (for me one obvious candidate for 'greatest work of art of any sort ever') but Schiff is something special again. I discovered this recording when I started working at Marbecks, bought it immediately and have often played it to friends and family as an example of just how profoundly life-enhancing music can be. I must have listened to it every day for almost a year when I first started. It is a disc that sells itself when played in the store and remains our best-selling version of the Goldbergs. It has brought tears to my eyes more than once. What makes this performance so special and what makes it a personal "Desert Island Disc" for me is the expressive range of his performance, the way the variations are presented as a single narrative arc encompassing all kinds of character, from ecstasy to despair, from anger to sarcasm, from silliness to serenity, from joy to the most profound tragic utterance. This is a live recording - which I would argue accounts for its powerful coherence and its sense of having been 'lived-through' - and indeed in the well-timed silences between some variations one can 'hear' the hall change subtly simply because of what has just been heard. This is a disc I could not live without and it is a constant source of inspiration, challenge and comfort for me. (Keith)"

As the New York Times said, "Mr Schiff is, in Bach, a phenomenon. He has quite simply internalized this music. He doesn't so much perform it as emit, breathe it." The fluency of the playing in this concert recording from Basel is quietly astonishing, the technical demands of the work transcended with uncanny gracefulness.

"Like Glenn Gould before him, András Schiff waited 20 years to revisit the Goldberg Variations. Unlike Gould, whose mannerisms grew more baroque than the work itself through the intervening decades, Schiff's second interpretation presents the Variations with as little interference as possible. Does this mean that "all" Schiff does is play the notes in front of him? No. The minute alterations of emphasis and articulation within each variation represent years of observation; the kind of study intrinsic to a proper exposition of the topology of Bach's thematic revolution. … "Great" is not a word to be used casually when it comes to CDs, but no other term does justice. Lucidity, elegance and strength are all here and exquisitely balanced. The definitive Goldberg? As far as I'm concerned, yes."
Ann Picard, Independent on Sunday

"After a long period with Decca and then a shorter one with Teldec, András Schiff seems to have found an ideal home chez ECM's New Series. He returns to the Goldberg Variations with the experience not only of years but after exploring early repertoires in his role as pianist/conductor - something I'm sure would have enriched his view of Bach performance. How good to see that when ECM makes a rare sortie into the central repertoire it does so with biting conviction."
Editor's Choice Gramophone Magazine (Awards Issue 2003)

"Since no great artist stands still, Schiff has now issued another performance of the Goldberg Variations. … This is a recording from a concert in Basel, October 2001, and the shapes, the contrasts, and silences Schiff brings to the aria and its 30 variations very much suggest a living organism. We don't hear Schiff's breathing, but we certainly hear Bach's as his spins the theme into brilliant cascades, gentle musings, or intricate canons. What Landowska called the "black pearl" variation, the sombre 25th, provides the emotional climax, as it should; but the set is still governed by Schiff's light wit, his delight in Bach's genius, and the joy of a pleasure being shared."
Geoff Brown, The Times

"Schiff is the master colourist who, like Glenn Gould in his later Sony recording, achieves impressive continuity between variations. Contrasts, too and never more so than in the sequence of variations Nos 20 to 22, taking us from brilliantly realised syncopations, to a glowering canon in sevenths then dipping suddenly for the intimate "stile antico" of the four-part 22nd variation. … As for overall style, repeats are often embellished, sometimes radically varied, such as the underlined counterpoint of No 8' s first repeat and the shift from staccato to legato in No. 11. … This is a fascinating, beautiful, deeply pondered and profoundly pianistic "Goldbergs", and while not "authentic" in the accepted scholarly sense, it is appreciative of Baroque manners and ornamentation."
Rob Cowan, Gramophone

Both Directions At Once: The Lost Album
more suggestions…