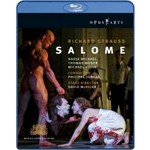 "The only ideal voice to be heard is the first, Joseph Kaiser's as an angelic-sounding Narraboth; but most shortcomings are overridden by Jonathan Haswell's accomplished filming. McVicar's energetic, slightly scary part in all this, as actor and designer manqué, comes across entertainingly in the 50-minute documentary."
(BBC Music)

"Nadia Michael… is an attractive Salome, moving like a dancer, as physically unafraid as she is vocally… Michael Volle is an imposing, rich-toned Narraboth… but it is Thomas Moser's weakly human Herod who emerges as the most truly lived-in character. Philippe Jordan seems... especially alert to the most modern twists of Strauss's harmonies. The filming (Jonathan Haswell) is sensitive to David McVicar's work while being much more than merely a static record."
(Gramophone)

David McVicar's powerful 2008 production of Oscar Wilde's bible-based drama takes the controversially disturbing film Salò as its visual reference, setting it in a debauched palace in Nazi Germany. Strauss's ravishing and voluptuous score adds to the sexual alchemy conjured by an international cast led by Nadja Michael in the title role. Filmed for the big screen with High Definition cameras and recorded in true surround sound.

David McVicar: A work in process - a full ITV documentary on David McVicar and his work on Salome, with unique interviews and extensive backstage footage (itv Productions)