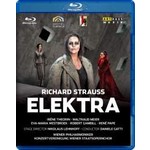 With Richard Strauss' Elektra, the Salzburg Festival delivers a thoroughly impressive new production that the Vienna daily Kurier calls the "best new opera production of 2010". Reaping acclaim are the top-quality vocalists as well as the mighty stage set and the sensitive direction of Nikolaus Lehnhoff. Portraying Elektra is Swedish soprano Iréne Theorin, who injects astonishing dramatic power into her role. "Impressive in every respect", wrote the Frankfurter Allgemeine Zeitung about her role debut here. Internationally acclaimed Wagner singer Waltraud Meier also gives her spectacular, commanding stage debut here as Klytämnestra. They are complemented by an outstanding Eva-Maria Westbroek as Chrysothemis, and a forceful René Pape as Orest. Nikolaus Lehnhoff's many years of experience on the world's greatest stages are clearly visible in his direction of the singers: moving about a sinister, forbidding set bathed in suggestively changing lighting, the vocalists are treated as stage actors, whose expressive gestures are captured with particular vividness and immediacy by the camera. Leading the Wiener Philharmoniker is Daniele Gatti. Alternating between late 19th-century lyricism and early 20th-century excess, he clearly emphasizes the dual conflicts at the heart of the work.

"Nikolaus Lehnhoff's new production of 'Elektra' ends with a stroke of genius that arrives with a shock." Financial Times

"Here's a treat for Expressionism junkies...dominated by Theorin's extraordinary heroine, a Brunnhilde gone seriously to seed, a real tour de force of concentrated energy, vocal stamina and dramatic power, who occupies most of the very well-made film in close-up. Daniele Gatti gets marvellous sounds from the Vienna Philharmonic, all the score's fever and neurosis but also its tenderness... There's really not a weak link here" Opera Now, Summer 2011 *****

"Elektra's Freudian creepiness constantly attracts sensationalist productions, so it's a pleasure to report just how fine this 2010 Salzburg staging is. Daniele Gatti's conducting is powerful enough, but never loses sight of the score's eerie lyricism and sombre glow, which Nikolaus Lehnhoff's staging embodies to atmospherically...Among Elektras on DVD this, along with Karl Böhm's historical performance, must rank among the best; and on Blu-ray it is superb." BBC Music Magazine, October 2011 ***** (Award Finalist 2012)