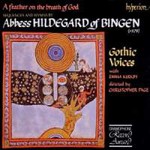 "Gothic Voices chose to perform the hymns and sequences with great simplicity, alternating a single voice with unison voices over drones. Bingen's spellbinding melodies are clear and meditative, achieving a rare, high beauty whose integrity has proved timeless." BBC Music

"Here's a collection of choice gems from one of the greatest creative personalities of the Middle Ages. We've limited means of assessing how these inspired pieces were performed in Hildegard's time; but the refreshingly unsophisticated timbre of the four sopranos and the reedy, almost boyish, vocal quality of the contralto are convincing enough to transport the listener right back to the unpolluted atmosphere of her cloister. Most to be savoured are the unaccompanied items, amounting to 50 per cent of the total. Indeed, since the notes make a point of telling us us that 'distractions such as the intrusion of instrumental decorations' were to be avoided, why did the producer go out of his way to introduce symphony and reed drones in the performance of the other 50 per cent? However, this is a delightful recording. When it was first released it sparked new interest in the music of the Middle Ages, and it remains a jewel in Hyperion's crown." Gramophone Classical Music Guide

"These hymns and sequences, most expertly performed and recorded, have excited much acclaim - and rightly so. A lovely CD" Penguin Guide