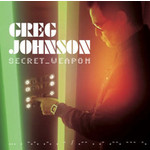 $25.00 In stock with supplier
ETA: 4-7 business days add to cart more by this artist

'Secret Weapon' is Greg Johnson's first independent album since 'Everyday Distortions' in 1995 and the first to be released in New Zealand on his own label JMA. Despite having a couple of offers on the table from major record companies, Greg Johnson opted to go it alone on his new album. Partnering with Auckland based music marketing company bandbutler.com, he has produced a career defining album. The recording and manufacturing of 'Secret Weapon' was paid for by fans who purchased pre-order packages from Greg's website. The names of everyone who pre-ordered the album are printed on the album artwork and on Greg's website. The pre-order campaign was an overwhelming success, with enough funds raised to produce and promote the album.

'Secret Weapon' was recorded at Greg's Santa Monica studio between June and October 2010 and sees Greg returning to his roots in certain respects and as Greg points out, the album contains some interesting collaborations and subject matter: "It's an international effort. Songs range from a story about a road-trip to Coromandel featuring Ben King on guitar, to a diatribe about aging Hippies in Venice Beach and one that I wrote looking over Niagara Falls in Canada on a visit to the wife's film set which features LA friends from Folk band The Tulips". Also appearing are U.S. band members Ted Brown, Sid Jordan and Simon Petty, Mark Goldenberg, a specialist lead guitarist, whose long list of bands includes Jackson Browne, Bonnie Raitt, Waylon Jennings, Willie Nelson, Linda Ronstadt, Eels and Natalie Imbruglia, provided lead guitar. Also from Calcutta Tajdar Junaid played guitar on a track, Boh Runga dropped in for lunch and found herself singing on 'Admit You've Changed' and a merchant banking friend from Texas yelled approval in the background 'Royal Me'".