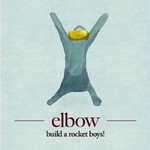 With the lyrics being strongly influenced by singer Guy Garvey's childhood, Elbow's sound here is as bold and grand as it has ever been.

Being the follow-up to their Mercury Prize winning 2008 album 'The Seldom Seen Kid', 'Build a Rocket Boys!' is studio album #5 from this Manchester-based indie rock quintet.

As on their highly-successful predecessor, the band chose to self produce the record at Blueprint Studios in Salford with keyboard player Craig Potter taking on mixing duties too. The lyrics are strongly influenced by singer Guy Garvey's childhood helping to keep Elbow's sound here as bold and grand as it has ever been.

'Build a Rocket Boys!' also features guest contributions from the Halle Youth Choir, retaining Elbow's strong links with both their hometown and the Halle itself, with whom they collaborated on a very special show at Manchester's Bridgewater Hall in 2009.

"It's an album that maximises the use of light and shade, texture and mood... Nobody does serious music like Elbow do..."
-Q

The King of Limbs
more suggestions…