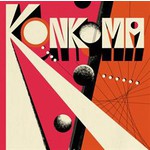 Rooted in 1970s Ghana, Afro-funk outfit KonKoma was produced and formulated by saxophonist Max Grunhard and producer Ben Lamdin (Nostalgia 77). The idea was to create a band around two highly esteemed Ghanaian musicians - Alfred Bannerman and Emmanuel Rentzos. Both are mercurial talents who over the years have graced the stage with the likes of Bobby Womack, Hugh Masakela and Peter Green as well as being long term members of the Afro-rock band Osibisa, but it wasn't until KonKoma that the two old friends have had a band built around the two of them.

KonKoma adds a progressive edge to their rich blend of Afro-funk, jazz, soul and traditional African rhythms as well as acknowledging the 70s recordings that spawned the sound. Produced by Max Grunhard and Ben Lamdin, the album was recorded and mixed by Mike Pelanconi (aka Prince Fatty) in Brighton.

Guitarist Alfred Bannerman, founding member of teenage Afro-rock band Boombaya (featured on the Soundway compilation Ghana Special) has remained one of the mainstays of the UK's African music scene for more than 20 years. Keyboardist Emmanuel Rentzos has been playing alongside his fellow Ghanaian since the early 1970s when he was the lead singer of the young Ghanaian outfit Santrofi's band. Once Max and Ben had won the support of Alfred and Emmanuel, Ghanaian musicians and now key members of KonKoma, Nii Tagoe and Reginald 'Jojo' Yates came on board.