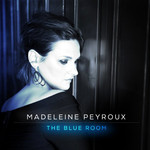 Celebrated and Award-winning jazz singer, songwriter, and guitarist, Madeleine Peyroux reinterprets songs with an emotion and depth that can't help but touch the soul.

Celebrated and Award-winning jazz singer, songwriter, and guitarist, Madeleine Peyroux presents her inspired new album, 'The Blue Room'. The album is a return to what she is known best for - reinterpreting songs with an emotion and depth that can't help but touch the soul.

'The Blue Room' features Madeleine reinterpreting songs from Ray Charles' seminal album 'Modern Sounds in Country & Western Music', as well as others from legendary artists such as Randy Newman and Leonard Cohen. Released in the summer of 1962, 'Modern Sounds' was a daring album for Charles as it broke the mold of what was expected from him, and in turn, truly represented artistic freedom - something that clearly inspires 'The Blue Room'. Conceived and produced by the legendary Larry Klein, he says, "Ray's cultural landmark of an album has always been a part of me. I have loved this album ever since I can remember and I knew that Madeleine would be the perfect voice to bring it to the forefront again."

The Brooklyn and Paris-bred artist, with a New Orleans pedigree, Peyroux's soulfully piercing voice and eclectic musical mix makes for magnificent story-telling. And that is exactly what each of the songs on The Blue Room does - tell a story - but from her own perspective. Infusing her own vision and reinterpretation of the songs with modern sensibility, Peyroux brings elements of jazz, country and blues into each song, while evoking a depth of emotion and sound of such legends as Billie Holiday, Patsy Cline, Édith Piaf, and Bob Dylan.

The Girl In The Other Room

Keep Me In Your Heart For A While: The Best Of Madeleine Peyroux (2CD)

Eric Clapton & Friends: The Breeze - An Appreciation Of JJ Cale