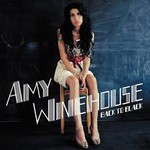 Amy Winehouse
Back to Black (LP)

'Back To Black' was the second and final album released during the late singer's lifetime. Although her 2003 debut was a success, it only hinted at the global appeal of her street-smart odes to 21st century life.

Combining a strong, vocal style that oozes soul, with often frank lyrical content recounting tales of love and loss, Winehouse was a truly talented songwriter with a great ear for melody and whose legacy of modern soul classics will influence generations to come. Includes the singles 'Rehab' & 'Tears Dry on Their Own'.

Side A:
Rehab
You Know I'm No Good
Me & Mr. Jones
Just Friends
Back to Black
Love Is a Losing Game

Side B:
Tears Dry on Their Own
Wake Up Alone
Some Unholy War
He Can Only Hold Her
Addicted