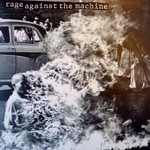 This is the legendary, self-titled, first - and best R.A.T.M. album, which includes the wickedly good tracks "Killing in the Name", "Know Your Enemy" and "Wake Up".

"Rage Against the Machine (R.A.T.M. or Rage for short) were the most popular, political heavy rock / rapcore group to come out of America during the early '90s, and this was their legendary, self-titled debut.

The very first thing you notice about this CD is the horrific cover, featuring the controversial photograph of Thích Quảng Đức self-immolating in protest of the Buddhist treatment under the South Vietnam government. It's a shocking image, yes... But very effective, and it leaves no one in any doubt as to the seriousness of this albums subject matter.

Frontman Zak de la Rocha's inspired, lyrical tirades on all 10 tracks offered here are visceral + cutting to the extreme - perfectly complemented by the funky & hard-hitting playing of his three cohorts: Tom Morello, Tim Commerford, and Brad Wilk. Morello's guitar playing in particular is outstanding & highly inventive… Even more so when you consider that much of his incredible sound comes straight from his hands, with minimal assistance from stock-standard guitar FX pedals.

The prominent tracks on R.A.T.M. include such wickedly powerful moments as the opener "Bombtrack", "Killing in the Name", the classic "Take the Power Back", "Bullet in the Head", "Know Your Enemy", and "Wake Up" (check out that Led Zep riff, man!) - really though, every cut on this recording is amazing.

After their split in the year 2000, the instrumental side of the band went on to form Audioslave with former Soundgarden singer Chris Cornell. To date they have produced three outstanding CDs together. And, although the path they have chosen to head down is a tad more mainstream than that which Rage Against the Machine trod, there is certainly plenty of the old group's vibe left in this new project, especially on 'Revelations'.

Although Rage released 4 studio recordings in their time together it is this initial outing that finds them at their bombastic best - melding caustic hip-hop, thrash and a metric ton of focused aggression into what has become an album that will survive the ages...

With it's heady concoction of skilled musicianship, memorable songs + high production values, 'Rage Against the Machine' remains as essential now as it was when it was first released back in the day!"
-GEOFF / MARTY (14/09/2006)

"On the strength of the album, they must be viewed as one of the most original and virtuosic new rock bands in the nation..."
-TIMOTHY WHITE, BILLBOARD (1992).

Back to Black (LP)