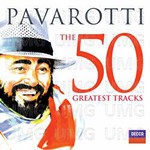 Luciano Pavarotti was truly the greatest tenor of all time, and the best known classical musician ever, still accumulating new and devoted legions of fans six years after his death. In celebration of 50 years' association with his one and only label Decca, we are proud to present Pavarotti The 50 Greatest Tracks.

This album contains nearly 3 hours of music and includes all his opera hits - including Nessun Dorma , used as the 1990 World Cup theme tune and the track that made him a household name - as well as all his famous popular songs: O sole mio, Caruso, Santa Lucia, Volare and many more. Other highlights include great duet collaborations with superstar friends Frank Sinatra, Bono, Eric Clapton and Sting plus fellow tenors Placido Domingo and Jose Carreras in the live Three Tenors version of Nessun Dorma that became the biggest selling classical recording of all time (15 million units)

Pavarotti The 50 Greatest Tracks - truly the definitive collection of the music of a great man and true legend!