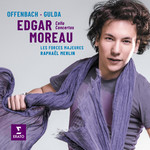 "Moreau is a commanding presence, singing tone that illuminates Offenbach's debt to bel canto. His virtuosity can be thrilling…The Menuett [of the Gulda] is done especially beautifully, with plenty of rhythmic point." Gramophone

"the star of the show, naturally, is cellist Edgar Moreau. From his first entrance in the Offenbach Concerto (2:45), you can tell this is a charismatic soloist, and as the movement progresses one is in owe of his virtuosity, reminding us Offenbach was often called "the Paganini of the cello" in his young years. Try the coda at the end of the first movement to hear an almost finger-breaking cello writing." TheClassicReview

"The young French cellist Edgar Moreau merits praise right off the bat for his unusual program here: both of these concertos will be unfamiliar to most listeners, and both are a great deal of fun. The eclipse of Jacques Offenbach's Grand Concerto in G major ("Concerto militaire") can be blamed on the fact that the work was butchered in publication and has only recently been restored to the form intended by the composer. It is a brilliant virtuoso work (Offenbach in his youth was called the Paganini of the cello), and Moreau captures well its mixture of blistering speed and humor." AllMusic.com