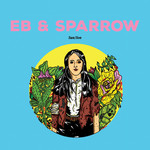 With an edge that harks back to old time jazz and blues singers', Ebony Lamb of Eb & Sparrow has led her band of talented men on a musical journey that began in 2010. They've traversed a pathway that has led them onto stages
with an astonishing string of folk-heroes: Rodriguez, Beth Orton, Pokey LaFarge, Wagons, The Warratahs, Tami Neilson and Marlon Williams to name a few.

Eb & Sparrow have carved out a niche, creating a soundscape that is at once spacious and lush, nuanced alt-country music that swings out into folk, soul, and rockabilly. Ebony's voice slides along the edges of Cat Power and Gillian Welch, and with a captivating presence, she delivers lyrics that dust off the truth to life's hopes and heartbreaks.

With delightful cover art by Grimoire and recorded with engineer and Tui Award winning producer Brett Stanton, they have crafted their new songs into a strong and beautifully articulate album culminating together as Sun/Son. There are moments on the record where the guitar warbles in and out through a timeworn Selmer amplifier, but the band doesn't try to rehash the past.

They hear the strains of a time long gone, and imbue each song with its memory; but let the songs stand in the present, a contemporary landscape colouring their canon of songs.