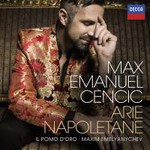 Following the success of 2013's solo album ROKOKO, Arie Napoletane is a brand new solo album for Decca's prolific countertenor Max Emanuel Cencic. With repertoire not dissimilar to that on Cecilia Bartoli's groundbreaking 'Sacrificium' album, Cencic sings arias by Porpora, Vinci and their contemporaries written for the superbly talented castrati of the day.

Focusing on the musically rich city of Naples during the Baroque period, this album, typical of Cencic's highly-regarded musical curiosity, contains a majority of world premiere recordings - TEN works in total. Just as ROKOKO contained an extra addition in the form of Hasse's Concerto for Mandolin, ARIE NAPOLETANE includes Auletta's Concerto in D major for harpsichord, two violins and continuo played by the dynamic Maxim Emelyanychev.

" . . . a recital of superb cogency that has claims to being his finest album to date . . . [these Neapolitan Baroque rarities are] woven into an emotionally coherent sequence that passes from triumph to resignation . . . Cencic negotiates this complex emotional parabola wonderfully well. This is a great voice, dark in tone, beguiling in its liquidity and finely equalised. His coloratura flows with great ease, stunningly so in the aria from "Eraclea", though it's the slower numbers, where the long lines are effortlessly sustained and the emotions keenly felt, that make the disc so special. Il Pomo d'Oro are on fine form, too, and Emelyanychev, volatile, sensuous and keenly intense, is impressive. An exceptional recital, very highly recommended." Gramophone Award Nomination 2016 - Recital

"As we have come to expect, the voice is smooth and evenly produced, with clean articulation and a slightly veiled quality (never becoming a hoot). His negotiation between chest and head voice is greatly impressive. The music is pleasant, sometimes stirring, and Maxim Emelyanychev leads from the keyboard with style . . . Cencic's voice rolls along beautifully, the music flows, nothing goes awry . . . Impressive Baroque easy listening." Opera Now

"Lovers of Late-Baroque opera and the counter-tenor voice will be in their element. Those new to this repertoire need not hesitate. Max Emanuel Cencic is in magnificent form with these high quality, yet inexplicably forgotten, arias." (MusicWeb)

The Three Tenors At Christmas