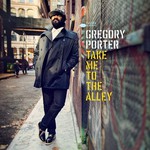 Gregory Porter
Take Me To The Alley

An artist whose music is at once timeless yet utterly of its time, Gregory Porter solidifies his standing as his generation's most soulful jazz singer-songwriter with this release.

"Holding On" the album's stunning opening track, finds Porter presenting his decidedly different version of the Disclosure single that he was the featured vocalist on and co-wrote for their album Caracal. "I decided to do the song the way that I would have recorded it on my record," Porter says. "It's a way of saying that a song is a song is a song. The lyrics and the intention of the song come through no matter what kind of bells and whistles are going on." The rousing, bluesy stomp "Don't Lose Your Steam" is the first official single from the new album and is dedicated to Porter's three-year-old son with encouraging lyrics about staying committed one's goals regardless of hardship.

In the autumn of 2015 Porter finally found the time to return to the studio in New York City to record Take Me To The Alley. As he's done on his previous three albums, Porter teamed with producer Kamau Kenyatta to craft a collection of stirring originals that juxtapose the personal and political. His partnership with Kenyatta started in the mid-1990s when he was a student at San Diego State University (Porter began his college years playing football on a full athletic scholarship before a shoulder injury diverted him into a music career). It was through Kenyatta's mentorship that Porter's professional musical career began.