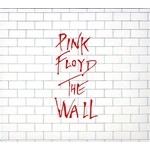 $70.00 In stock with supplier
ETA: 2-5 business days add to cart more by this artist

Released as a double album in November 1979, it was supported by a tour with elaborate theatrical effects, and adapted into the 1982 feature film, 'Pink Floyd - The Wall'. The album features the band's only number one single 'Another Brick in the Wall Part 2'.

One of the most acclaimed concept albums of all time, "The Wall" is renowned as Roger Waters' Rock Opera dealing with abandonment and personal isolation. Featuring the unique artwork of Gerald Scarfe, the album also yielded the US & UK No. 1 hit Another Brick In The Wall Pt2., and was subsequently adapted for cinema by Alan Parker featuring Bob Geldof in the lead role.

"The Wall" features a harsher and more theatrical style than Pink Floyd's previous albums. Wright left the band during its production but remained as a salaried musician, performing with Pink Floyd during the Wall tour.

Hey You
Is There Anybody Out There?
Nobody Home
Vera
Bring The Boys Back Home
Comfortably Numb