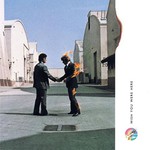 Pink Floyd followed the commercial breakthrough of Dark Side of the Moon with Wish You Were Here, a loose concept album about and dedicated to their founding member Syd Barrett. The record unfolds gradually, as the jazzy textures of "Shine on You Crazy Diamond" reveal its melodic motif, and in its leisurely pace, the album shows itself to be a warmer record than its predecessor.

Musically, it's arguably even more impressive, showcasing the group's interplay and David Gilmour's solos in particular. And while it's short on actual songs, the long, winding soundscapes are constantly enthralling.
5 / 5 All Music Guide

Side 1:
Shine On You Crazy Diamond (Part One) (1-5)
Welcome To The Machine