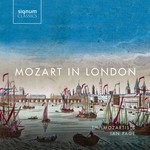 The Mozartists present an unprecedented survey of Mozart's childhood stay in London from 1764-65. The wide-ranging programme includes Mozart's remarkable first symphony (composed when he was eight years old), along with his two other London symphonies and his first concert aria. The repertoire also explores music that was being performed in London during Mozart's stay, including works by J. C. Bach, Thomas Arne, Abel, Pescetti, Perez, George Rush and William Bates, many of which have not previously been recorded.

This ingenious "musical exploration of Mozart's childhood visit to London" interweaves three early symphonies and the concert aria K21 with music performed in the city during the family's stay. - The Sunday Times

Vigorous vocal music by Thomas Arne, a dazzling harpsichord concerto from JC Bach, and a Carl Friedrich Abel symphony as tastily rich as a chocolate éclair - The Times

Ian Page with his handpicked orchestra of around 20 players, is a dab hand at this sort of stuff. - Classic FM

"Page draws lively and engaging performances from his orchestra, and the results certainly charm, whilst the programming ensures that there is much of interest as it illuminates musical life in 1760s London so wonderfully" - Planet Hugill

"There are excellent performances of some of the fledgling Mozart's London pieces interspersed among an abundance of rarely investigated repertory that was researched and edited especially for the occasion...Page's knack for choosing interesting singers yields contributions from eight highly capable soloists...Nevertheless, the star of the show is the superb orchestra, which never sounds in the least bit perfunctory or formulaic." Gramophone Recording of the Month July 2018

"An ambitious and fascinating two-disc collection...here's some striking music by the Neapolitan Davide Perez, and some cheerful songs by Egidio Duni and Samuel Arnold, all enterprisingly performed by the Mozartists under Ian Page." Observer

"One of its constant pleasures is the young British performers' sheer gusto. Ian Page's musicians, the Mozartists, bounce along on their period instruments with an alert attack, succulent tones (woodwinds especially) and no signs of panting or strain. Ana Maria Labin, Helen Sherman, Rebecca Bottone and other singers take spine-tingling leaps into the stratosphere and always come up smiling." The Times

Bach To The Future
more suggestions…