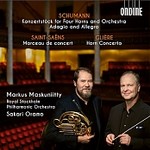 Markus Maskuniitty's debut recording together with the Royal Stockholm Philharmonic Orchestra together with its chief conductor Sakari Oramo, showcases four concertante works for horn and orchestra covering a period of one hundred years (from 1849 to 1951). Robert Schumann described the horn as the 'soul of the orchestra' and he had a profound affinity with the instrument. The most substantial of Schumann's works featuring the horn is the Konzertstück for four horns and orchestra, Op. 86. Schumann considered the work as one of his best achievements as a composer. During 1849, Schumann wrote a total of three works featuring the valve horn. The Adagio and Allegro for horn and piano, Op. 70 may be considered a precursor to the Konzertstück and is a central work in the Romantic horn repertoire. This recording includes an orchestration by conductor Ernest Ansermet. Camille Saint-Saëns wrote a large number of concertante works, including a masterfully crafted concertpiece for horn and orchestra in 1887. It highlights Saint-Saëns's mature skills in orchestral writing and as a composer of solo instrumental music. Final piece of the recording is Reinhold Glière's Horn Concerto. Completed in 1951, it was the composer's swansong. In this romantic concerto one can hear echoes of Tchaikovsky and other great masters of Russian classical music.

Markus Maskuniitty is a prizewinner at the Nordic Horn competition in 1989, the Markneukirchen International Instrumental Competition in 1991 and at the ARD Competition in Germany in 1994. He has created an extensive career as a horn soloist in the capital cities of three European countries. He played Principal Horn with the Finnish Radio Symphony Orchestra from 1991 to 1993 and then joined the Deutsches Symphonie-Orchester Berlin as Principal Horn. In 1997, he joined the Berlin Philharmonic as Principal Horn. In 1999, he left this position to return to the Deutsches Symphonie-Orchester, where he remained until 2007. Maskuniitty joined the Royal Stockholm Philharmonic Orchestra as Principal Horn in 2007. Maskuniitty was appointed Professor of Horn at the Hannover Musikhochschule in 2000. The present album is Markus Maskuniitty's solo debut recording.

"The playing of Maskuniitty and his three colleagues is simply superb, with exemplary balance between them and the thrilling arpeggio swoops in the last movement" BBC Music Award Finalist - Concerto 2020

"[Maskuniitty's] sound is glorious, with a tight core of vibrato encased in burnished mellowness… Together, the four soloists make a pleasingly bright and buzzy sound, and their ensemble is impeccable…[in the Glière] Maskuniitty revels in the music's melodic and colouristic opulence, and is supported affectionately by Oramo and the orchestra…This entire programme is an absolute delight." Gramophone