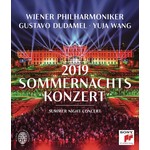 The world's biggest annual classical open-air concert, The Summer Night Concert of the Vienna Philharmonic, returns to the magical setting of Schönbrunn Palace Baroque park in Vienna. After his successful debut at The Summer Night Concert in 2012, world renowned conductor Gustavo Dudamel conducts the Summer Night Concert for the second time. Superstar pianist, Yuja Wang is this years soloist. The concert will take place on Thursday June 20, 2019 with "Rhapsody in Blue" being this year's theme with an all American program. The concert is broadcast on TV and radio in more than 60 countries, and thus reaches an audience of millions. The evening's repertoire features popular classical works such as Gershwin's Rhapsody in Blue, Dvorák's Symphony No.9 "From The New World", Barber's Adagio for strings, Sousa's Stars and Stripes Forever and Steiner's Casablanca Suite.

Sousa: The Stars and Stripes Forever