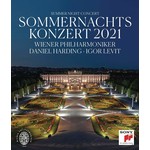 The Summer Night Concert of the Vienna Philharmonic is the world's biggest annual classical open-air concert and took place in the magical setting of the Schönbrunn Palace Baroque park in Vienna on 18 June 2021. The theme for this year was Fernweh (the longing for far-off places) and included musical favourites from Bernstein, Verdi, Rachmaninov, Sibelius, Elgar, Debussy and Holst. It also included many fantastic Summer Night Concert debuts: SNC debut by pianist Igor Levit and British conductor Daniel Harding; the pianist's first release of an orchestral recording; and Rhapsody on a Theme of Paganini: Vienna Philharmonic's first ever performance of this piece, as well as the Intermezzo from the Karelia Suite.

The concert is broadcast on TV and radio in more than 60 countries, and thus reaches an audience of millions. The Vienna Philharmonic is an orchestra founded in 1842 and consistently ranked among the finest in the world.

Igor Levit is Musical America's "Recording Artist of the Year 2020", the 2018 Gilmore Artist and has been described by The New York Times as one of the "most important artists of his generation". In November 2020 he was nominated for a Grammy in the category "Best Classical Instrumental Solo".

Daniel Harding CBE has conducted the Vienna Philharmonic since 2004 and made his Summer Night Concert debut this year. A renowned opera conductor, he has led critically acclaimed productions at the Teatro alla Scala Milan, Theater an der Wien, Wiener Staatsoper, the Royal Opera House, Covent Garden and at the Aix-en-Provence and Salzburg Festivals. Since 2007, he has been Music and Artistic Director of the Swedish Radio Symphony Orchestra, and Conductor Laureate of the Mahler Chamber Orchestra, with whom he has worked for over 20 years.

Rachmaninov: Rhapsody on a Theme of Paganini, Op. 43

Holst: Jupiter (from The Planets)