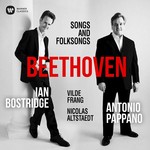 At the heart of this programme of Beethoven songs performed by Ian Bostridge and Sir Antonio Pappano is the song cycle 'An die ferne Geliebte' (to the distant beloved). Bostridge describes it as 'the distillation of Beethoven as a lover'. Among the other items are the rapturously lyrical 'Adelaide', the sombre 'In questa tomba oscura' and a selection of Beethoven's settings of folksongs from the British Isles, which elicit the participation of violinist Vilde Frang and cellist Nicolas Altstaedt. 'When we all play together,' says Pappano, 'it's like a family making music at home.'

"[In The Song of the Flea] Pappano invests the fidgety piano part with piquant playfulness whilst allowing Bostridge to flex his comedic muscles to the full…[In An die ferne Geliebte] Bostridge's warm lyricism casts an enveloping spell - though some of his expressive traits can be a touch predictable, their range circumscribed if affecting." BBC Music

"This newcomer fus[es] Bostridge's detailed, borderline fussy manner with Pappano's sprightly playing, buoyant and delicate. One misses limpidness in Bostridge's tone, admittedly, but he makes the songs his own in a performance that is never less than engaging and, as usual, conveys an unflinching and persuasive belief in the material." Gramophone

"With a more than 30-year career behind him, [Bostridge] still sounds distinctive and youthful in Beethoven's setting of [Adelaide]...He balances a mature account of the song cycle An die ferne Geliebte with a delightful selection of his late Irish, Scottish and Welsh folk songs, with deluxe instrumental contributions from Frang, Altstaedt and Pappano, revelling in Celtic wit more flamboyantly than Bostridge." Sunday Times