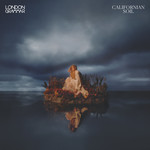 Californian Soil is the irrefutably beautiful third record from London Grammar, who's success and longevity as a band has traced the British pop graph for over a decade. Over the years however, success was not all it was meant to be, namely for frontwoman Hannah Reid, who's perpetual first-hand experience of misogyny in the music industry weighed heavy. However, with the support of her two friends and fellow bandmates Dan Rothman and Dot Major, Hannah has found the power to become the leader she needed to be for this new iteration of London Grammar.

'Misogyny is primitive,' says frontwoman Hannah Reid, 'which is why it is so hard to change. But it is also fearful. It's about rejecting the thing in yourself which is vulnerable or feminine. Yet everybody has that thing.' Reid continues, 'This record is about gaining possession of my own life. You imagine success will be amazing. Then you see it from the inside and ask, why am I not controlling this thing? Why am I not allowed to be in control of it? And does that connect, in any way to being a woman? If so, how can I do that differently?