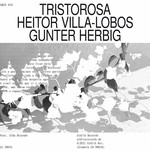 Gunter Herbig, Brazilian-German guitarist living in New Zealand, is well-known for his benchmark-setting performances of New Zealand guitar music by Lilburn and Farquhar for the Naxos label. His Gurdjieff transcriptions for electric guitar 'ex oriente' on BIS Records achieved legendary status and are considered by specialists and music-lovers all over the world as superior to any of the many recordings for piano. He extended his electric guitar discovery journey with a most exemplary cross-sectional expedition of Heitor Villa-Lobos' guitar music that leads to its final culmination in the famous Aria from 'Bachianas brasileiras' No. 5 sung one octave lower than the original by the great samba singer Alda Rezende. This album, and particularly the final 'Aria', is destined to achieve cult status