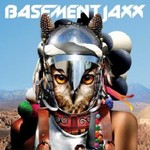 $32.00 In stock with supplier
ETA: 2-5 business days add to cart more by this artist

Including the Top 20 smash hit summer anthem of "Raindrops", 'Scars', Basement Jaxx's fifth album, is another masterpiece in the dance-pop spectrum.

'Scars', Basement Jaxx's fifth album, is another masterpiece in the dance-pop spectrum. With a host of special guests, including: Yoko Ono; Sam Sparro; Santigold; Kelis; and Chipmunk, 'Scars' is as innovative in its sound as it is in its vision... Indeed, there's no need for Felix Buxton & Simon Ratcliffe to try and embrace any kind of retro outlook to their music as this duo's sound still remains as urgent and as impactful as ever.

From the Top 20 smash hit summer anthem of "Raindrops", featuring Felix's twisted vocals, to the string-drenched, grime-esque title track "Scars" and the gorgeous "My Turn", which stars Lightspeed Champion on vocals; Basement Jaxx deliver here an album that outshines just about any dance act in the U.K.

Other acts appearing on 'Scars' include Amp Fiddler; Jose James; and Yo! Majesty.