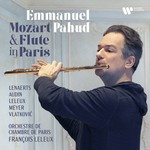 "The pieces on this album represent different golden ages of the flute," says Pahud. The earliest, dating from 1778 are two concertante works that Mozart wrote while visiting Paris. The newest, premiered in 2014 by Pahud and the Orchestre de chambre de Paris, is Dreamtime by Philippe Hersant. The intervening period is represented by pieces by Saint-Saëns, Fauré, Chaminade and Poulenc, composers whose music embodies France's special relationship with the flute.

"[Philippe Hersant's Dreamtime supplies] some of the most instantly beguiling and exciting bars of music I've heard open a disc in some time." Gramophone Editor's Choice October 2021