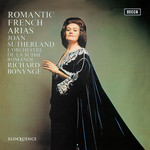 One of Dame Joan Sutherland's own favourite recordings, long unavailable on its own, reissued with additional material recorded at the Geneva sessions, with rarely seen photographs and a new booklet introduction.

In her introduction to this reissue of Sutherland's 1969 recording of Romantic French Arias, Fiona Janes notes that the album was made just shy of the soprano's 43rd birthday, roughly halfway through her career. A distinguished mezzo-soprano herself, Janes is now Artistic Director of the Joan Sutherland & Richard Bonynge Foundation. The Foundation's mission is to foster the next generation of operatic artists through competitions and scholarships; the technical finesse and dedication of Sutherland to her art remain models for any aspiring singer, and this album stands testament to her ambition to conquer the coloratura repertoire in an area - French grand opera and opéra comique - which had not previously been considered her home territory.

Sutherland's husband and coach Richard Bonynge was candid about the acrobatic as well as artistic nature of her act, both on stage and in the studio: 'the public that comes to a bel canto opera is coming to a vocal circus - the critics have said that against us, I'll say it for us. The singers are treading the high wires, they're doing vocal gymnastics, and if they're big singers and they bring it off well, it's very exciting.'

Few vocal recital albums - sung by her or anyone else - demonstrate the thrill of that encounter as vividly as this one. Showpieces from Auber's Fra Diavolo, Offenbach's Robinson Crusoé and Meyerbeer's L'Étoile du nord in particular require and receive an astonishing agility, lightness of touch, security of register and delicacy of temperament. Sutherland is in spectacular form and at the pinnacle of her virtuosic powers, making every cadenza, arpeggio and high note sound not only effortless but always beautiful in some of the most exquisite and technically demanding French arias ever written.

Janes also reports the pleasure Bonynge had making this album in Geneva with the Suisse Romande orchestra who had been so thoroughly schooled in the right kind of attack and phrasing required for this music by their founder-conductor Ernest Ansermet. While pyrotechnics were always Sutherland's trademark, however, she was equally at home producing long legato lines of lilting warmth as can be heard in Meyerbeer's Dinorah. For artists and listeners alike, this is an album of pure delight.

The original arias album is filled out by a short recital of French songs, recorded at the same sessions with Bonynge at the piano but only first published in 2004.

"She has an exceedingly large amount of showy and intricately written music to sing, and she carries out the task without ever misplacing a note or uttering one of doubtful intonation … deserves high praise for imagination, industry and an impressive level of excellence." High Fidelity, January 1971

"The more difficult the music sounds, the better she does it." Fanfare, March 1983