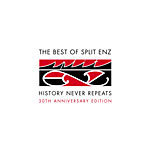 - Brand new track order, including 'I Walk Away' for the first time ever

It is a testament to the band's durability that after 30 YEARS, all Split Enz albums are still available and are still purchased regularly - in fact the band are now very close to selling half a million albums in NZ alone!

With the release of the first ever Split Enz DVD and the re-issue of 'History Never Repeats', we are celebrating the 30TH ANNIVERSARY OF SPLIT ENZ's first show on 10th December '72, plus the enduring legacy of the band.

Since 1991, the single CD compilation 'History Never Repeats' has stood as a unique overview to the lasting qualities of New Zealand's greatest band. For the hardcore fans, there is a 2CD set 'Spellbound' and for the party faithful, there is 'History Never Repeats'. Seventeen songs that matter, seventeen songs that are indelibly etched in the hearts and minds of the New Zealand public for now and ever.